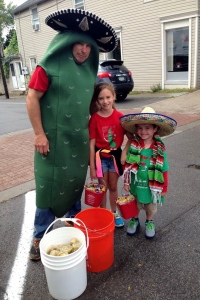 Aaron and his little helpers getting ready to participate in Lewiston’s annual Peach Festival Parade.

The Spicey Pickle is owned by Aaron Rotella. He had wanted to open an eatery in Lewiston for quite some time. He has had a passion for cooking (and of course eating!) since he was a kid. The right spot opened up, and he began the process of transforming the location into a Mexican restaurant that opened in early March 2014.
You may be asking, “Why the misspelled name?” Aaron has been making spicy pickles for years and thought that would make a good restaurant name. A friend was helping make a template for his idea and made the spelling error. Instead of fixing it, Aaron decide it was a good idea to have a misspelling, and so the “e” stayed.

To read an article about the opening, Click Here.